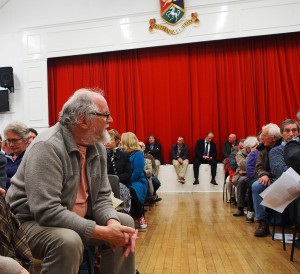 The Fair Share for Ramsgate Meeting on Oct 5th attracted more than 200 people on a cold, wet Monday night. The meeting was organised by four of the Ramsgate residents associations to ask Council Leader Chris Wells to spend the £3 million plus from the sale of Pleasurama on capital projects in Ramsgate, projects like Project MotorHouse, Ellington Park and the Ramsgate Tunnels. Chris Wells acknowledged that the town had a good case for getting the Pleasurama money as they had had to put up with their seafront being a mess for many years.

Residents were angry that last year, Thanet District Council raised £16.7 million for capital expenditure in Margate and only £783K for expenditure in Ramsgate. The frame of The MotorHouse supports the main road to Ramsgate harbour and the Promenade. It urgently needs replacing. It will cost Thanet District Council £1.3 million to fill the site and produce no benefit for the town . For a further £300K, TDC could replace the frame and kick start the Project MotorHouse re-development of the site which will give the town facilities it needs.